Link of the Day:

Frugal Freedom eats cactus, and show you how.

Digs Inside and Out in Portland is potting up mixed succulents in odd containers for centerpieces.

The latest from Lyndsey Hamilton

We love succulents–the structure, the color.  They can serve as your centerpiece, in a bouquet, or placed anywhere throughout your wedding: cocktail tables, mini-arrangements.

We do wedding centerpieces every year. Also, we’ve been known to do a bar mitzvah or two. No baby showers yet, though.

Jen has lost her delicious succulents.

Crabapple at ART TEA LIFE knits some cactus art, or rather tagged a cactus, and meets Ed another cactus artist and surreality ensues. 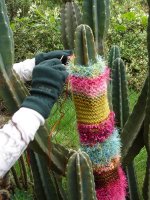 Dry Stone Garden has placed an Agave medio-picta in a terra cotta egg pot next to a native fescue to nice effect, go ahead and check it out. I’ll wait for you to come back.

Out of Denver, we find a homeowner with a sense of the absurd. Via Kenny Be’s Yard Arteology it’s Downspout Saguaro sculptures.

Christopher Pace has a very nice photo of a spider on a Kalanchoe tomentosa with a very delicate spider. Click through for the big one. 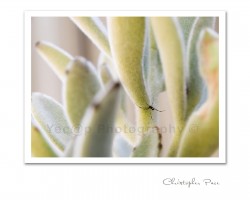 Boing Boing guest blogger Charles found some lovely looping Aporocactus at the Desert Botanical Garden in Phoenix. The resulting photo is nice too.

I found these looping cacti in… Phoenix, where exotic species display the most amazing attributes… I admire those traits.

STESMA forever is a blog about a school in Malaysia, and they have a cactus garden. Pictures ensue. Very nice.

Cactusmania has a thing for crested cacti. Here’s a post filled with photos of Astrophytum crests. very interesting.

Welcome to My View has a very nice picture of a barrel cactus in full fruit.

Today’s image is another from the San Xavier del Bac Mission just south of Tucson, Arizona. As my friend, Suzanne, and I were leaving the mission from a short visit in early December, I saw this beautiful barrel cactus showing off it’s lovely bright yellow fruit. Behind the barrel cactus, a purple prickly pear cactus was displaying it’s lovely purple pads, making a great background for the green and yellow of the barrel cactus.

Capree at My Adventure is Your Advantage has a very Modern Christmas. No succulents, it’s true, but those mirrored christmas trees are tres moderne.

So here’s a succulent post link if you prefer. In this edition, Capree’s dog bites the heads off her baby toes. And there are pictures too! 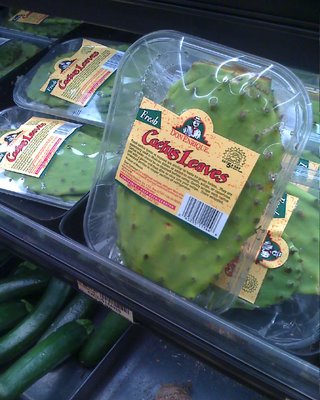 No, really, I am shocked. I’ve been to Kodiak, and I can tell you how shocking this development is. It’s very shocking, indeed. Deliciously shocking.

Mandalas & More likes her christmas cactus but wants to know why it’s called “cactus” since it appears to be a succulent. 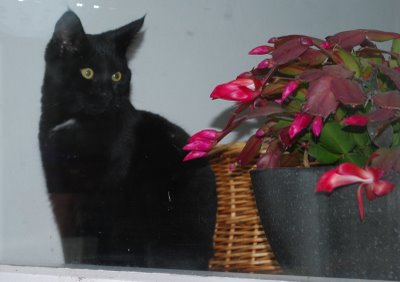 Her readers seem to think it was a marketing decision.

Well, the answer is simpler than that. It’s called a cactus because it is a cactus. In the cactaceae family and all. Not to get all botanical on you, but it’s in the Cactoideae Subfamily and the Rhipsalideae Tribe. Now you know and you are thus now an expert. Share your knowledge wide and especially with your family this year at Christmas.

And it’s also a succulent, too! As all cacti (except the lovely Pereskia) are succulents.

I think that’s enough info about the Christmas cactus on this blog for this year.

The Christian Science Monitor’s garden writer decided to stay indoor in winter and instead of visiting gardens has visited garden blogs, including our humble blog.

The Cactus Blog actually belongs to a California Nursery, Cactus Jungle, not an individual. Although its focus is San Francisco and Berkeley, its range is actually country- and worldwide.

Can you imagine a labyrinth created with succulent plants? I look forward to returning to learn more about that. Did you know that prickly pear cactus grows well in parts of Italy? I had to laugh out loud at the discussions of Canadians and cactus — cactus with eggs for breakfast, a “cactus cam” aimed at a houseplant — do you think that’s like watching grass grow?

It’s drolly entertaining and informative at the same time.

I may have to add that quote to the top of the blog.

Plus she visited blog friends Water When Dry and Plants Are the Strangest People, always a good thing  to do.

Pencil and Leaf has a nice roundup of solanums, including some spiny pictures of porcupine tomatos and naranjillos. 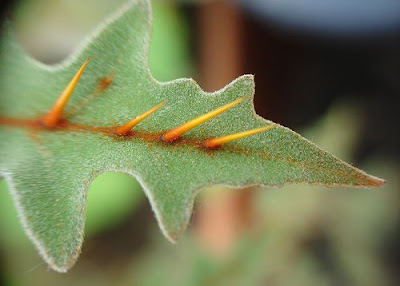 Garden Wise Guy has an eye for the Euphorbia-Agave combo photo.

Gators in the Garden has planted a lot of graptopetalums and graptoverias too, and has the pictures to prove it.

It’s an amazing closeup of a bee in a cactus flower.

cactus and bottle photo by pelrohde.

their harmony and the rain outside prompted me to take these pictures. i will experiment with the cactus more later on, i decided.

The Texas Highways Blog reminisces about West Texas and the cactus.

Common wisdom says if you’re not originally from West Texas, you usually have to live there for a while to appreciate its attractions, but then you’re hooked for life. Having lived in Lubbock after growing up in southeast Texas, I can attest to that fact. In my case, it took almost a year, but I eventually came to treasure the flatlands and canyonlands that at first seemed so foreign to me….

We spent the rest of the day just visiting and touring Alice’s expansive cactus/rock garden, which now takes up at least a third of the yard. Not only does she know each plant by name, she can tell you where each rock came from—Austin, Kyle, Coleman, New Mexico, Arizona, Nevada…the list goes on and on. She knows because she handpicked each one and placed it herself. (Bill lent a hand with the larger ones.) Besides rocks, cacti, succulents, grasses, and other low-maintenance plants, the garden features bleached skulls from hapless cows, deer, coyotes, and javelinas donated by friends; several large pots; weathered tree trunks; and a dolmen (a bench made with two or more upright stones capped by a horizontal stone). Alice invites viewers: The cactus garden is just east of the Muleshoe Country Club.

That’s a nice story. You could click the link to read the rest of it, although I did copy a lot of it here. But there’s more for you too, if you click through.

markerlove has the most adorable little crassula’s in these odd little tomato cans. One might suggest that it is the odd tomato cans that make the whole thing adorable, but I prefer to think it is all about the succulents. However, I wouldn’t recommend following the yogurt cup trick.

Apparently there are some artists who post drawings of cactus on Mondays, callling it Cactus Mondays.

This week, Soulbrush had a nice pencil drawing of a spiny column cactus, possibly a cereus or an echinopsis. Plus links to the other Cactus Monday peoples.

Gary Kavanagh took a photo of a succulent in Persing Square in LA (So one presumes.) 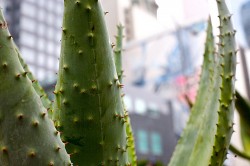 It’s an aloe, possibly A. ferox. Click through to see the full size photo. Very scenic.