The Yale Daily News has an article about some stolen cactus from the botanic garden, and some other stuff too – it’s a long article – but this is what caught my interest. 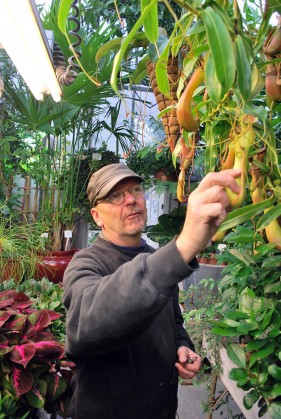 I may not know all the banana species you might find at a botanic garden in Connecticut, but I know a carnivorous Nepenthes pitcher plant species when I see one. In case you were thinking that maybe he’s reaching for a banana behind the nepenthes, click the photo for the giant version, and you can see he’s actually holding one of the pitchers of the pitcher plant.

That was fun! But wait! That’s not all the fail we have at Yale today. To the article!

Eric Larson, the manager of the Garden, said the stolen cacti were among the most valuable plants in the Garden’s collection. Eight of the plants were of the genus conophytum — quarter-sized clusters of cacti — and were located in one small tray, he said.

And there we have the classic conflation of cacti and succulents. Conophytums are in the Aizoaceae family, formerly of the Mesembryanthemaceae family, also known as “Mesembs” like the Ice Plant and Lithops, or Living Stones; but definitely not the Cactus (Cactaceaa) family. Conophytums are from South Africa, as opposed to Cacti that are from the Americas. Wow, that was geeky.

Normally, I wouldn’t bother to correct some student journalists getting some basic facts wrong, because who cares really, but it was the photo of the “Bananas” that got my attention, and so once I got started I couldn’t be stopped. Until now…