What to do in Long Beach

Go on a Native Garden Tour of the Palos Verde Peninsula and beyond.

(T)he eighth annual Theodore Payne Native Plant Garden Tour, April 9 and 10… is a self-guided tour of gardens from Sylmar to Long Beach and from Monrovia to Venice to Santa Monica, including a number of gardens in the South Bay.

While this may be the mother of all garden tours by the vastness of properties on display, it’s not your grandmother’s garden tour with tea and crumpets.

My grandmother never served tea and crumpets during a garden tour. Had she had a garden that was on a tour of Brookline gardens, she would probably have served her famous chopped liver. 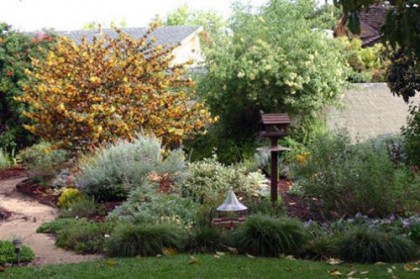 The garden of Anne O’Brien of Torrance will showcase shade natives, including plants for habitat, fragrance and cut bouquets, during the Theodore Payne Native Plant Garden Tour.

Here’s the gardens my grandmother took me to.