We Get Winter Questions, UK Edition

I feel terribly guilty, my suggestion of repotting may have killed my colleague’s cactus. After seven happy years sitting on the same small pot, the cactus really seemed to like its new bigger house, at least it was growing (mostly on its ‘waist’). However, three weeks after the repotting, you can see it is now ‘deflating’. 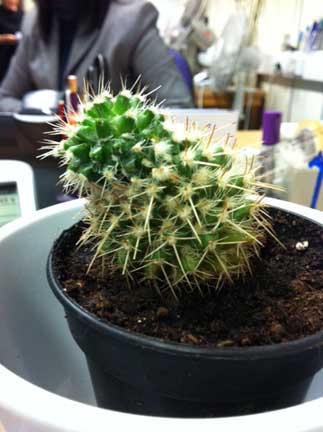 There is good drainage and it was not over-watered. Maybe it got less water than usual in the last three weeks. Then, after a particularly cold weekend at the office, the cactus looks as shown in the photo. However, it had experienced colder temperatures last December, when it was left to fend for itself at the office and it snowed in the UK. Today it even looks more deflated than when we took the photo yesterday. Please help!

It’s hard to tell from the photo exactly what’s going on there. It is possible that it is shrinking due to less water and colder temperatures – they do that in the desert when the temps get below freezing. But it is more likely that the plant has rotted out from the inside and is unlikely to survive

Generally you don’t want to repot cactus in winter when they are dormant. What happens is that you damage the roots a bit when repotting and then add a little water and the roots can rot off since the plant is not “awake” enough to repair the damage. A fungus or virus can then take hold.

The best I can offer is that you should let the plant dry out completely at this point and hope for the best. You could also spray the plant with an organic fungicide like Neem Oil just in case, but I don’t see signs of fungus on the outside.