We Get Questions from Anonymous

I got this little cactus in February and finally repotted it today, two months later, since it’s now spring. While I was chipping off the peat stuff from the store, I noticed this odd crack in the bottom, as though the plant had maybe been overwatered sometime before I got it (it would have to be before I got it because it hasn’t gotten any water at all so far with me), but I’m scared it might be something bad. As you can see from the second picture, the top is still nice and green, and even has a bud, which has been there since it was at the store. So it looks fine when planted. This plant is only about an inch across, by the way. 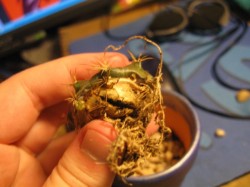 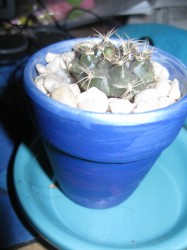 It looks like whatever damage the plant had from the propagator was healed over when you got it. If the top picture is after you replanted it, it will be fine. Wait a week after repotting and then it’s time to start watering.