Hello
I found your website/blog while searching images of plants in an attempt to identify mine (pics attached). I acquired this about a year ago when the yoga studio it was living in was closing. The owner told me she had it for several years but, prior to that, it was owned for a number of years by a friend’s relative in Boston. (I am in CT so assume the plant has been indoors it’s whole life).

The prior owner told me that at one point she had it up on a trellis and it seemed to do better. She also told me she had not repotted it since she acquired it. So, I brought it home, tried to let it acclimate for a few months, then repotted it in cactus soil that I’ve used successfully in the past (Fat Plants San Diego Cactus & Succulent soil).  Then several weeks later, I moved it to a south facing window for more sun, then tried to put it up on a trellis, but it does not look as good as when I got it. 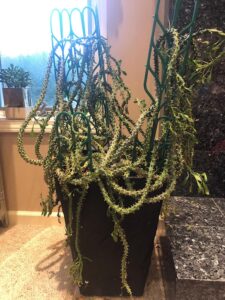 The post that brought me to your site originally was on page 11 of the “questions” — the title was “Dragon Flower” which is what you advised the plant was. BUT that one did not have any of the little “tufts” of leaves at the ends like mine does (now fewer and more wilted 😞). I also read in another post of yours that a milky white sap indicates euphorbia and mine does have that sap.

ANY advice you can offer to help ID this and/or advise on care would be SO much appreciated.

I have watered sparingly (maybe every 2-3 weeks) because of all I read about too much water being worse than not enough, but maybe the change of soil would require more (since it was originally in plain potting soil as far as I could tell). Maybe it’s also getting too much sun now???

I really love this plant and want very much to do it justice.

Thanks in advance for any information you can provide. I love your site and wish I was closer!

Your plant is a Monadenium ritchei. I would recommend pruning it back, no reason for it to be going everywhere like that. The basic issue seems to be that uit was in low light for a long time and so it has gone travellingeverywhere, and is a bit floppy too. More sun is better, but you need to take time when moving a plant into full sun – generally move it closer over the course of 1-2 weeks. You may at this time have some sunburn on parts of the plant. Since it is such an overwhelming size anyway, trim off any parts that are too floppy or sunburnt and bring it back down to a more manageable size. Careful of the milky white sap, wear gloves.