Hi there.
I live in England, and I have been growing some cacti for about four years now, but I don’t know what they are. They have never flowered, and I was wondering if you could identify them?
I know that the one on the far left is Astophytum ornatum, and that the one one in from the right is Opuntia subulata. I have only had these for about two months. 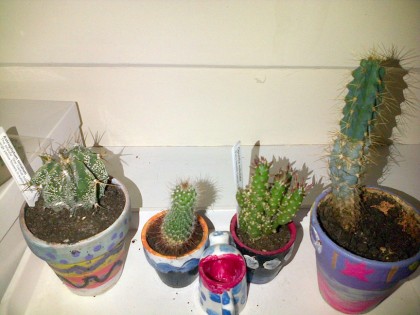 Also, could you please give me some tips as to how to make them all flower?
Thanks very much.
Helena

Helena,
The Opuntia subulata looks likes it’s probably a O. subulata monstrose, which means it won’t get as tall, which is probably a good thing. The one on the far right could be a Cereus, but I wouldn’t be sure of the species until it blooms, which could be many years depending on the species – they often won’t bloom until they’re 6 ft. tall or more! The one on the left looks like it’s not getting enough sun, so it’s hard to tell for sure what it is, but either a Mammillaria or a Rebutia.

As for flowering, the Astrophytum looks large enough to flower, as well as the Mammillaria/Rebutia. However the other two wouldn’t bloom for many years. To help the first two along in blooming I recommend a lot of sun and a bloom food – Bone Meal, and we prefer Fish Bone Meal, works well.

Depending on where you live in England the sun could be a problem, in which case you might want to try a full-spectrum UV light.