We Get Golden Barrel Questions

I came across your web site and saw that you answer questions, so I thought I would try sending one. My friend gave me a large golden barrel pup from her father’s outside golden barrel cactus that lives in LA. I have been waiting for it to callus, and I went to check it today and the cut area was covered in a white fuzzy substance (pictures attached). I immediately thought of fungus, especially since it had been sitting in a box cut side down. I also thought it could be mealy bugs, and there was some orange color when I dabbed at it with alcohol on a paper towel, but not as much color as I would have expected if it was a dense mass of mealy bugs. I also looked at the cut surface and one of the pieces that came off with a 10x hand lens and I did not see any adults, just a dense matrix of white fluff. I had looked at it briefly when she brought it to me a week ago, and I do not recall seeing such a dense area of white fluff, although it was dark and I only looked very quickly. So whatever it is seems to have grown quite a bit in a week, although I can’t be 100% sure. 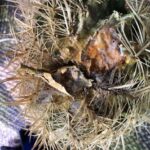 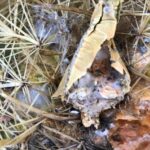 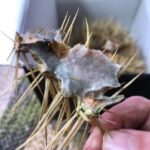 I attached some pictures, in the last one the spots where the cut surface is orange is where I dabbed it with the alcohol on the towel. It seemed to dissolve from the alcohol, it didn’t really seem to rub off onto the paper towel.

Do you think this is fungus, mealy bugs, or something else, and can it be saved? I was admonished not to kill the cactus so I would be very disappointed if I lost it even before planting it. If you don’t just answer random questions, I understand but thought I’d give it a try!

Thanks,
Rachel
California Department of Fish and Wildlife

It’s going to be a problem since it’s winter, to treat this successfully. It’s a fungus and likely bacterial. I recommend sulfur on the cut edge and treat the whole plant with a systemic fungicide like Infuse, after the sun goes down. Keep dry! Air circulation. It will be at least a month before you can try planting it, and a heat mat under the pot might help it root (warm and dry).