The Central Valley (CA) has had water issues. Some orchards have died for lack of water, or at least for lack of drip watering systems. Cactus may be the answer.

A cactus plant that produces delicious fruit may show promise for cultivation in the water-short west side of the San Joaquin Valley.

Its second promising feature is its absorption of selenium, a compound that is overabundant in westside soils….

A cooperative project between the U.S. Department of Agriculture at its facility in Parlier in Fresno County and Fresno State University is evaluating the growth potential of the cactus…

The cactus under study is Opuntia, a variety native to the U.S. Southwest. It grows in the wild in desert and arid regions, the Western Pacific and near the Mediterranean. Its fruit is called cactus fig, although some have referred to the bright red delicacies as cactus apples and prickly pears….

Three irrigation strategies are being studied. One involves good quality water; another, poor quality water; and the third, no water at all. Absorption of selenium by the cactus will be measured and evaluated.

Another important aspect of the study is the exploration of new and improved food products developed from the figs and the thick cactus stems. The fruit of the cactus is edible when peeled, and sweeter and juicier than might be expected. Its pulp and juice have been used to produce jams, jellies, candies and other fruit products. 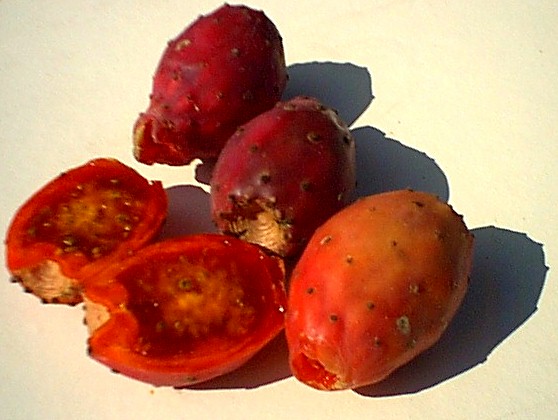