Oy. It looks like nopales might become the next health fad. I suppose that would be good for business, although we never did sell a lot of hoodia plants.

It turns out the cactus is not just found in the desert anymore. From grocery stores to nutritional stores, specialty boutiques and natural product aisles, a specific form of cactus has been making a name for itself. Plucked from the desert in the western United States and most of Mexico, a cactus known as the “prickly pear” is gaining popularity in the alternative medicine world. 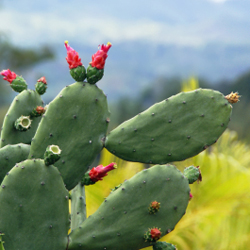 The prickly pear cactus is being harvested because every component of the plant can be used to enhance your body’s vitality.

I just don’t know. It’s the use of the word “vitality” that sets me off. Maybe I’m just too preternaturally skeptical.