A cactus grower wins an award and makes the news in Derbyshire, UK. 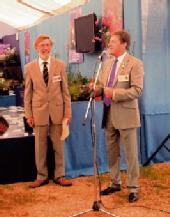 Receiving the award from Alan Titchmarsh

This month he was given his first official recognition for the research he has carried out for more than 50 years.

At the Hampton Court Palace Flower Show, in London, he received the Brickell Award 2010 for excellence in plant conservation, following his study of the plant genus Lithops, commonly known as “flowering stones”.

Brian, of Old Hackney Lane, was presented with the prize by gardener and television presenter Alan Titchmarsh.

Sweet! Can we get an award for our 10 years worth of trying to plant cactus in Berkeley clay?