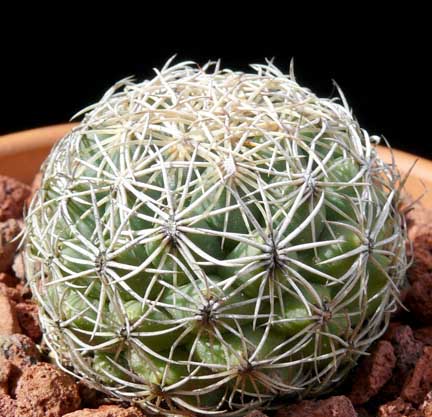 I blogged this little cactus earlier this year. We hadn’t had a new crop or featured it in our monthly email in a few years, so I got my act together and featured it for this month. Nice little specimens they are, too.

These are small barrels with recurved spines so they’re not particularly dangerous. Originally thought to be Mammillarias since they also have prominent tubercles, the grooved tubercles in the Coryphanthas are the give-away that these are their own genus.

While thse will stay small, getting only about 3″ across, eventually they might get slightly more vertical and top out at about 5″ tall. Flowers are highly variable – mostly yellowish white but some are pure white and they also can come in a range of pinks too, although nobody has named cultivars based on the flower colors that I’m aware of.

Did I mention that they’re from Mexico? Pretty widely spread too, which might be the reason for the range of flower colors.