Hilltop Steakhouse is gone for good, but the cactus remains! 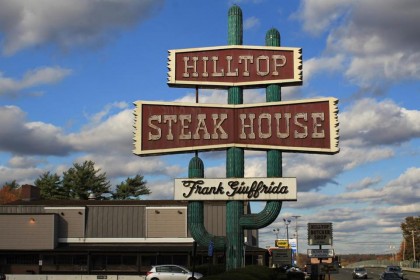 Whither Hilltop Steakhouse? Closed since 2013, the landmark restaurant on Route 1 in Saugus is about to be demolished. That’s the bad news, at least for lovers of its marbled beef and baked potatoes. The good news is that the giant cactus that greeted patrons is staying put. The developer “recognizes that the cactus is such an iconic item that he couldn’t do any better than to reuse it”….

The Hilltop was opened in 1961 by Frank Giuffrida, a butcher whose name is emblazoned on the 68-foot tall, 45-foot wide cactus. That won’t remain, apparently. We’re told the developer plans to retrofit the Route 1 icon with LED lights and replace the name.