The Agave Was Vicious, And So Was I

The Christian Science Monitor’s garden writer has a run in with an Agave, and lives to tell the tale.

Instinctively I knew that the repotting procedure would be a struggle. Impenetrable garden gloves were essential. I bought a pair that covered my hands and part of my forearms.

I used a hammer to smash the container that this masculine succulent had long ago outgrown. I tore strips of plastic away from Mr. Handsome’s roots. 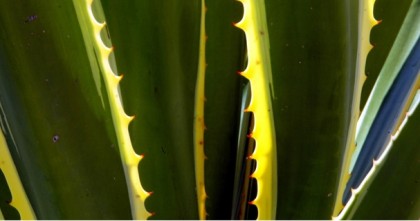 “I know it’s torture now,” I apologized as I yanked his thorny spear-shaped leaves out of the jail that had formed in his snug pot, “but you’ll feel freer and much more alive soon.”

In reply, he stung the part of my arm that was unprotected.

We’ve all been there. Agaves are vicious and mean and poisonous too. Never reach down to pick up a nice gentle soft fuzzy friendly kalanchoe when it’s sitting next to an agave. Yow, those pointy tips can dig deep.