Succulents in the Summertime

Caroline from Marin sends us 2 photos of her recently planted succulents.

I purchased this cactus from you about a month ago. The leaves are slowly turning black, almost as if they are burning? I live in Marin and it recorded full sun almost all day. Any advice? 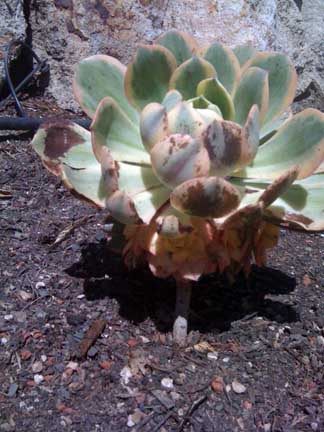 Hi. I purchased this aloe plant from you about a month ago and sent a note last week because I was concerned it wasn’t doing well. It seems to be getting worse. Here is a recent picture. Any suggestions what could be wrong? 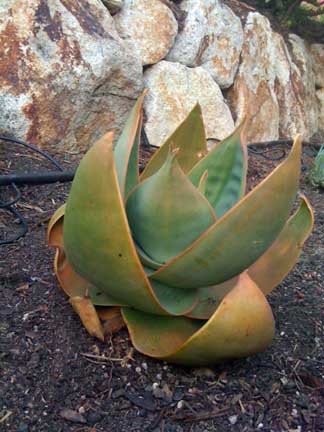 Both of your plants, Aeonium “Sunburst” and the Aloe striata are winter growing plants from Mediterranean Climates just like ours (the Aeonium is from the Canary Islands and the Aloe from South Africa), where all the rain is in the winter months and summers are basically a long drought.

To deal with this they have a summer dormancy period (just like many native Californian plants) where they shut down and nap for the summer and then wake up with the onset of the winter rains and start their active growth stage.

The Aeonium deals with the summer dormancy by letting some of the lower leaves dry out and curl up, to reduce surface area exposed to the sun and the Aloe by doing something similar as well as developing Carotenoids (red and orange pigments) that are more resistant to UV during the long hot summers and increase in the intensity of the sunlight and UV.

Both of the plants you sent photos of look normal for this time of year and should take off with new growth in October and November and really look great by the Holiday season. You can keep them slightly awake and looking “garden fresh” with an occasional drink (weekly to every two weeks), but do not over water in the summer, since it can lead to rot and infections, since while they are dormant they have a harder time fighting off infections.