I happened upon your blog while looking up some info on succulents and found it very helpful! I’m still a little unsure about watering succulent starts though. None of the nurseries I have talked to have been able to help me solve the problem. I have a few successful leaf starts growing and recently tried starting a few more. I’m having a hard time telling if I’m over or under watering them though. I’ve attached a picture of two sets I currently have (“Dying” and “Healthy”). One is pretty healthy (they are about a week old) and the others have completely changed colors (they are mostly from a purple graptopetalum). I’m thinking they are over watered. Is that correct? How often would you recommend watering these? I’m in Utah and these are outside in temperatures between 40 and 80 right now in partial sun. I think I may have gotten rather lucky that my first batch had some success, although quite a few of the leaves did die rather than grow. 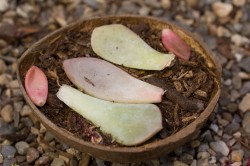 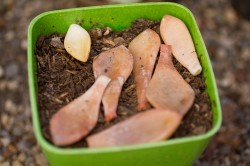 Cassidy,
I can’t tell you how to grow them in your climate as it is so different than ours. In general, you can expect a certain amount of loss, and it should take a year or so to get small plants. It’s probably better to grow them inside. And it’s probably better to use a succulent soil, rather than the bark based soil you are using. Finally, I would bury the cut tip of the leaf into the soil a bit, rather than just set them on top. All that said, I do not know if it is overwater or underwater, too much sun or soil that isn’t drying out, or some other possible problem – that’s the joy of propagating – learning your conditions and how to get the plants to grow locally. You’ll need to do some tests treating different groups differently and see how they grow.