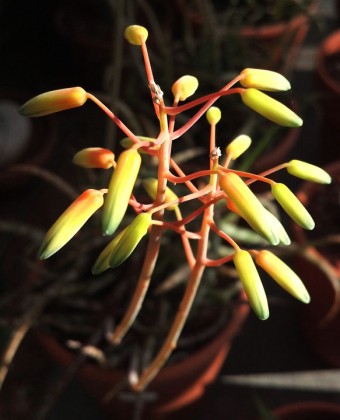 Aloe bakeri is one of the grassy aloes from Madagascar. As such it’s not really hardy around here, although it is semi-hardy so if you really want to grow it outside in Berkeley you probably can if you take care when there’s going to be a frost to drape a soft frost blanket over it, so we have it inside in the greenhouse. Because we want you to have more success.

It can be difficult to photograph Aloe blooms since they’re on such tall bloom stalks and in this case a spidery grass aloe below is hard to get into the photo with the closeup of the blooms.