Hi from the Big Island of Hawaii,

I have three Euphorbia Lactea plants that I have had for almost three years now. They have been healthy and have been in the same location since I got them. One of them just started having a problem, though, and I was hoping you could give me some suggestions on how to help the plant and perhaps eliminate the problem. About a week ago I noticed a dark, mushy section on one of the fans of one of the plants. I didn’t know what to do but I took a knife and just kind of cut along the border of the mushy part. I didn’t know what to expect but it seems like the fan is continuing to rot along the edge of the cut. I am attaching a couple of pictures for you to see what’s going on. I water about every two months and the other two plants are not having any of these symptoms. I love the plant and I hope there is a way to stop the spread of the rot and save it! 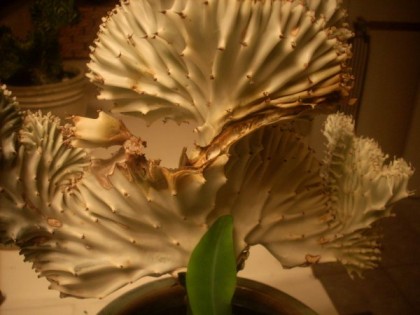 I have to say the only concrete idea that I have is, it looks like your crest may be outgrowing the ability of the grafted photosynthesizing base plant to feed it. It could be that there is just too much of the fan for the limited green tissue to support. It seems like a weird line of damage, if you were here (or someplace cold), I would say it was likely frost damage. The only other thing I can think of is that it had an mite infestation and that led to a fungal infection. However Albino Crests are easy to lose, since they are dealing with both the lack of chlorophyll and the cresting mutation, which may just be a non-fatal virus. Can you send me a couple of macro-close-up photos of the damage? Maybe I will see something in a closer look…