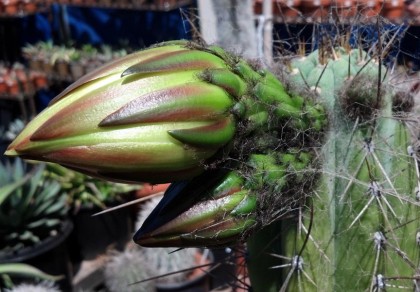 It’s time for the blooms to start opening. Not today, judging by the bud, but maybe tomorrow. The flowers are white and big.

According to the wiki,

The human use of the cactus dates back thousands of years to the northern coast of Peru and the monks of a pre-Inca culture known as Chavín (900 BC to 200 BC). They prepared a brew called “achuma”, “huachuma” or “cimora” which was used during ritualistic ceremonies to diagnose the spiritual links to a patient’s illness.