I just spoke with someone about my very unhappy cheiridopsis plant, and she gave great suggestions for getting rid of these mites that are crawling all over it, but suggested sending pictures so you could see if something else needs to be done. 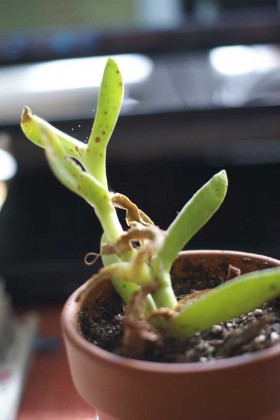 I love this plant so much that I brought it with me to New York when I moved out here, and it seemed to be adapting at least as well as its keeper to the new neighborhood until about a week ago, when I replanted it in a bigger pot. The mite problem had already started, but I didn’t realize it at the time (thought a spider had made a web there). I just used regular potting soil, which is darker and moister than the local Berkeley soil that I used last time I repotted, and also made the mistake of watering it the next day (it was looking unhappy, and since it has been unusually hot here, I thought that was the problem). All of the rotted branches you see in the picture are recent, as in the last few days, so I am really worried that the plant is dying quickly. I will see if I can get some neem oil here, per your suggestion. Should I also repot in cactus soil? Should I cut off the rotted roots? Any other suggestions are appreciated!

I’m sorry to have to be the one to tell you but I don’t think your plant survived the transition. You can try repotting into a faster draining cactus soil and spraying for the spider mites, but it looks to me like it’s probably too late.