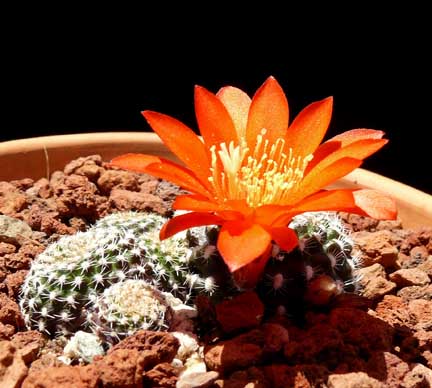 These small cacti can get as big as 2 to 3 inches! Totally amazing, if you ask me. Usually the flowers are more red than this, but as we know from our discussions over the past few days, I’m a big fan of….

Also, the contrast in the dark stems with the white spine color is very striking even when it’s not in bloom. You do have to look beyond the brightly colored flowers when they’re open to see the small cactus lurking behind it, though.

Did I mention that the genus was named after a 19th century French cactus dealer by the name of Pierre Rebut? Well, since it’s rebutia season, I thought you should know. Oddly, it was grouped and named by a German botanist, Karl Moritz Schumann from Görlitz.

Rebutias are very popular because not only are the flowers brightly colored and quite large compared to the tiny plant, but there are a lot of them all spring and summer long (depending on the species.)