Presidential Campaign Quote of the Day

The post-mortems have already started.

(T)he big mistake was picking the Disasta from Alaska.

I think it’s too soon. Everyone should vote in 15 days, and then we can settle on the reasons McCain lost.

And here, have a cactus: 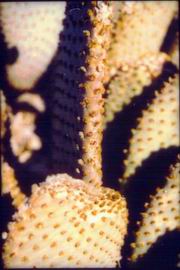 It’s a little fuzzy. This shot was actually taken 6 years ago with a film camera and digitally scanned! Yes, kids, they used to have something called “film”.