When we were clomping through some Costa Rican jungles, we saw lots of epiphytic peperomias up high in the branches. Here’s one just starting the climb on a fallen branch with tillandsias. 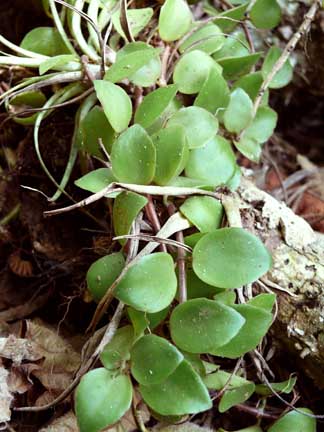 That is one nifty peperomia they have there in the jungle.

Did I mention that the name peperomia is in fact from the same name as peppers (they sound alike, they are alike!), since they’re both in the same botanic family, Piperaceae, which is in fact called “the pepper family”? No? Well, let me tell you… It’s the genus Piper that yields the famous black peppercorns that created the spice wars and the piracy and the tales of buried treasures told through the ages, by elderly grandfathers trying to scare the little ones.

However, just to be clear, this so-called “Pepper family” that includes black peppercorns and succulent peperomias does not include bell peppers (Capsicum annuum), for those would be in the Solanum family (Solanaceae) that includes the nightshades and the tomatoes and potatoes and our favorite, the purple-leafed naranjillo (Solanum quitoense) from Colombia.

Interesting where these blog entries can get to once you start deviating from plant that started it. I like it!