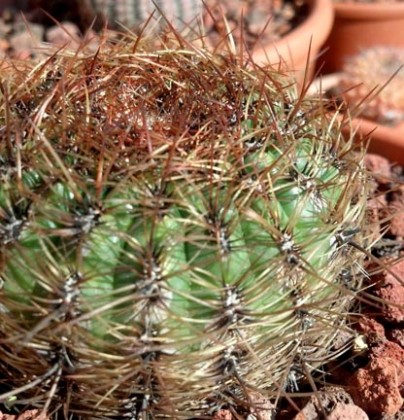 Hardy to 20F, and it has very saturated pink flowers. Small pink flowers. If you click the link above you can see one of the flowers in a picture I took last year.

It is a high altitude plant from the high altitude areas of Peru. How high? I’m talking very high.  It is only found above 10,000 feet and has been found as high as 14,000 feet. That’s high up there in the Andes of Peru, indeed. Very high. Very cold.

These cacti are somewhat variable, but they are generally solitary, flattened globose, 5 to 6″ across. They are distinguished by their elongate aureoles.

The genus is named after the town of La Oroya, where these plants were first discovered. It’s primarily a mining town, and is now considered one of the most polluted towns in the world. Wow!

Related to the Echinopsis genus, it is in the Trichocereeae cactus tribe (Trichocereus being an older, defunct genus now subsumed within Echinopsis, but the tribe name remains).