Here’s an interesting story of cactus being used as part of the admissions process to Oxford. I assume its a good subject because the information is readily deducible and yet most applicants don’t already have a prior knowledge of the inner workings of the cactus.

Teenagers being interviewed for a place at Oxford might be handed a cactus and asked to describe it… according to sample questions released by the university today in an attempt to demystify its admissions procedure…. 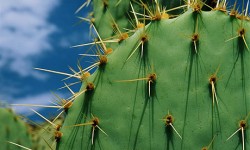 The interviewer who set the cactus question, Martin Speight, of St Anne’s College, said: “We give the student a cactus in a pot and a close-up photo of the cactus’s surface structure and ask them to describe the object in as much detail as possible using the plant and the photo. We are looking for observation, attention to detail, both at the large and micro scale.”

Candidates seeking a place on an undergraduate degree in biological sciences are expected to deduce why the cactus is bulbous, or why it has a particular array of spines.

“There will frequently be more than one logical answer to these questions, and we are likely to follow one answer with another question – for example: ‘The big spines are to stop the cactus being eaten, yes, but by what sort of animals?’,” Speight said.

“We would also bring in more general questions at the end of the cactus discussion such as what are the problems faced by plants and animals living in very dry habitats such as deserts.”

However for today’s class we’re asking all of you loyal readers to describe everything you see in the above photo, using as many botanical terms as possible. Extra points for correct use of the word “Aureoles” and double scores for use of the phrase “Ripped apart by a javelina in heat”.