Turns out it includes steel planters and succulents. My favorite combination! Either that or a combination of vodka and, well, no need for anything else really, just the vodka will do. Anyway, here’s the garden in question.

Everything changed for designer Dustin Gimbel when his client Linda Sackin in Huntington Harbor spotted the sleek metal planters that Gimbel installed her in son’s landscape. 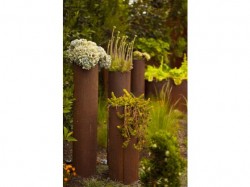 Before, Gimbel had lovingly designed and cared for a formal garden in Sackin’s Victorian-esque home. “It was all black slate, cottage flowers and boxwoods,” said Gimbel of the symmetrical garden he tended for two years.

Lots more modern planters and succulent photos if you click through. Look for the Squid Agaves!