One of our Favorite Endangered Species in the Sunday Chron

Limahuli Valley on Kauai’s North Shore, with its green-mantled spires of volcanic rock, starred as Bali Hai in the movie “South Pacific.” The Limahuli Garden, one of five units of the National Tropical Botanical Garden, occupies 17 acres of this improbably gorgeous place; an additional 985 acres preserve remnant upland forest….

Limahuli’s signature plant is the alula (Brighamia insignis), a lobelia relative that could have been a Dr. Seuss invention; it’s been described as “a cabbage on top of a bowling pin.” The alula’s natural habitat is the precipitous Na Pali cliffs, where only a few individuals remain. No one has ever seen its pollinator in action; some speculate that it may be the elusive green sphinx moth, or something even more rare, if not extinct. Botanical garden botanists have rappelled down the vertical cliffs to hand-pollinate alula plants in situ. Alula has been successfully propagated by Martin Grantham at San Francisco State University, among others – but is hard to keep alive. An attempted introduction at Kilauea Point is looking unsuccessful. It really misses its cliffs, where it’s being displaced by the likes of invasive sanseveria, the familiar houseplant “mother-in-law’s tongue.”

The SF Chron didn’t include any pictures. Here’s a picture of one of our plants: 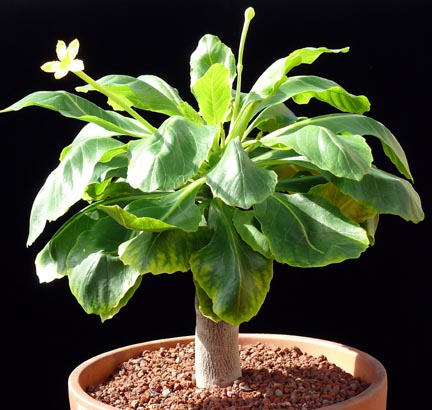 Flower closeup after the break… 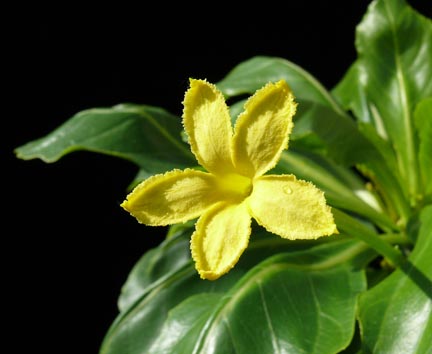