…of Cactus Costumes on the blog, and by then you will have chosen your own special cactus costume to make and wear on Halloween. If you send me photos, I will be able to extend this costume fetish of mine for another week.

I was sitting around thinking of a great idea for a costume and remembered my boyfriend telling me… (h)is mother had a Cactus ornament on her antenna of her car.

You can imagine where the rest of this story goes.

I thought you might like a picture of a real cactus to go with this one, so we can compare and contrast. 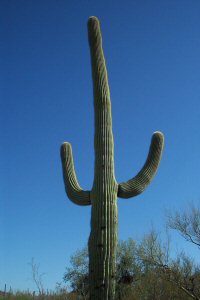 Well… I had no idea, but it turns out that costume is quite realistic. Scroll up again and take a look. You can practically feel the spines sticking into you. Now scroll back down again, and just add some sunglasses there, and that hat too, and YES! They are practically identical. Such artistry, such hyper-realism. 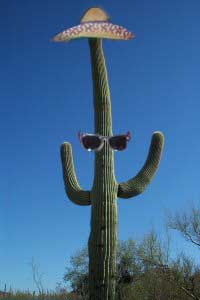 No, I am not nuts, stop saying that. Photoshopping sunglasses on a cactus is perfectly normal. And I stopped talking to myself years ago. Stop pestering me to go see a doctor. I did not. No. No. OK, I concede that, but must you be so aggressive when you make your points? I’m feeling a little put upon right now, I think I’ll go take a nap. No. NO! OK, maybe on Monday I’ll call and make an appointment; will that satisfy you?