Oh No! Next come the Dinosaurs! We’ve seen this movie before and it doesn’t have a happy ending.

The oldest plant ever to be regenerated has been grown from 32,000-year-old seeds—beating the previous recordholder by some 30,000 years.

A Russian team discovered a seed cache of Silene stenophylla, a flowering plant native to Siberia, that had been buried by an Ice Age squirrel near the banks of the Kolyma River (map). Radiocarbon dating confirmed that the seeds were 32,000 years old. 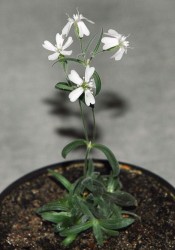