They have succulents there, but alongside a Pork Festival.

(W)hen I heard about North Hollywood hosting a flea market in walking distance, I was elated. But I was hesitant when I heard it would be combined with a food truck fest…. I was worried that the popular mobile feeders would deter customers away from the local vendors.

…I smelled grilled pork in the air…

And… the booths were empty. Artists and vendor owners smiled at each passing customer, waiting for a sale… I stopped to take a few shots of miniature succulents…. 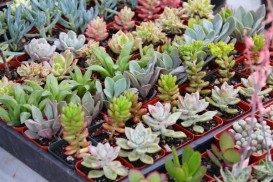 I heard a dance number starting as I walked toward the succulent booth again. Only a few were missing. I picked four, each small enough to fit in the center of my palm. They would be low maintenance. They just needed to be placed in a spot with consistent sunlight, I was told. When I left, it started to rain.