The Huffington Post has a feature on what to buy in New York. I wonder why they’re focused on just New York? Bastards.

Anyway, they feature these cute succulent things, and claim they’re only for hippies. Hippies in New York! What about Berkeley hippies? Don’t we like small glass objects with unrooted plants in them? 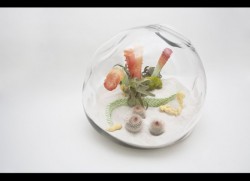 Haven’t the Huffington Post people seen my recent terrarium posts? Don’t worry, there are more to come, and ours are just as cute as those Brooklyn ones. New York!

I recognize rebutias and tillandsias in there. The other stuff is more mysterious.

And finally, please note that the next recommended New York gift in line after this one on the Huffington Post is cheese. Cheese in New York! What about San Francisco??? Don’t they like cheese too??? Shall we ask Iowa to chime in here? Does Portland want to let everyone know if they like cheese? They like tillandsias for the holidays, maybe they would like cheese too.

By the way, my friends have a very nice cheese shop in Portland, in case you wanted to stop by and tell them Peter sent you. That’s Tim behind the counter on the front of their website.