More From "Around the World in 80 Succulents"

Today we are traveling around the world. Earlier we posted from Canada – Ottawa! – and Ireland – Piltown! – because it seems like there are succulents everywhere, and the fanciers to match. Or at least the reporters to try to make sense of it all.

Here we have a travel article about Chandigarh, near the Pakistan border, home to Le Corbusier’s biggest building.

And they tell you to visit some nearby gardens too. Very generous of the travel writers, although to be honest, when given the opportunity to visit the Assembly building, really who cares about a few measly cacti. But for you, here you go anyway.

The Cactus Garden is Asia’s largest of its kind with over 3500 species of cactus. Visit the 17th century Pinjore Gardens spread over 100 acres. According to Hindu mythology, it is believed that the Pandava brothers rested here during their exile.

They might as well point you in the direction of the nearby taco stand around the corner from Louis Kahn’s National Assembly Building in Dhaka, Bangladesh. 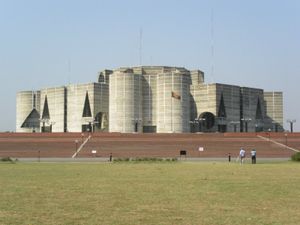 I’m sure they make very good tacos there.