Yes, I don’t understand it any more than you do, but Martha Stewart is selling a barrel cactus. 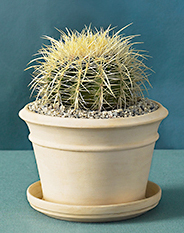 This unique, barrel-shaped cactus is said to grow towards the south, leading to its “compass cactus” nickname. A wonderful selection for the cactus aficionado or for the cacti novice.

Well, that’s a whole lot of oddity. It’s a golden barrel, not a compass barrel, so it won’t “grow towards the south.” It’s nickname is “mother-in-law’s seat” which is even more entertaining than the made-up “compass cactus”. It’s not fast growing, and it won’t yield pineapple shaped yellow flowers. It will be at least 20 years before it flowers at all, and then they will be small yellow flowers like this.

How do I know all this? I bought one of these from Martha 15 years ago already and I still haven’t had a single pineapple-shaped flower on my compass cactus that doesn’t face south! I’m so mad I could steam an asparagus.