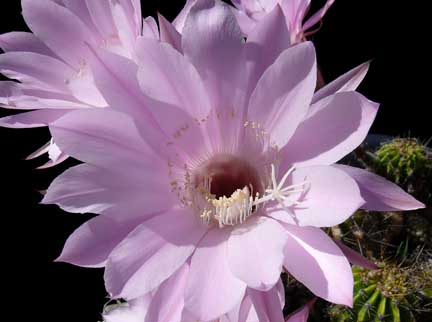 Another color than the white flowers I last posted for this species. Are they a variable species, or a cultivated variety? Or is that the same thing, after all?

The giant funnel blooms of Lobivias got moved into Echinopsis, along with pretty much everything else pretty from South America, in 1975 based on a treatment by Walter Rausch, however many growers are late to accept this change. Botanical arguments still rage about the size of the Echinopsis genus. Mats Hjertson believes Rebutia even should be added! Them’s fighting words!