What does it take to grow lithops? Let’s see what the Deseret News out of Utah has to say.

My friend Clark Moorten, a desert-garden authority, recommends that I keep a misting bottle near the lithops. “If you just can’t stand it and must water them, wait a week, then spray them with the mister,” he says. 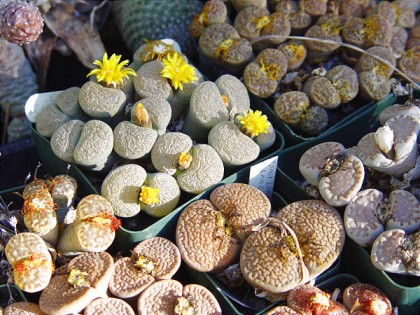 Misting is important because much of southern Africa, from the east coast of Natal to the pointed Cape Horn, experiences a long dry season. In the brutally dry west coast of the Atlantic, the dry season is even longer. However, heavy coastal fogs travel inland, often at night, to lay down a thick layer of dew. Plants here have evolved to utilize this airborne moisture during a long drought. It explains why regular watering regimes during a dry season are a killer.

Well that’s what I tell everyone around here: Mist! Don’t water! I suppose that means if you’re growing your lithops outdoors in the Bay Area, close to the coastal fog belt, then you don’t even have to mist them at all. Just be sure to have them under cover during the winter rains.

Identifying lithops species can be very difficult, what with the hundreds of subspecies. You generally have to wait for the plant to flower, and then you can try to match the leaf markings and the flower color to pictures in a book. Good luck with that, I always say. We have identified about half the species we carry. Sometimes we leave off the subspecies name, just because the names can get too long for our labels.

We also grow them very small, which is how they grow in nature – basically invisible among rocks of the same colors. Some people like to grow them bigger, which means more water, but then they’re very prone to rotting out quickly. So we do not do that.

Here’s a small one that hides well in our lava mulch. 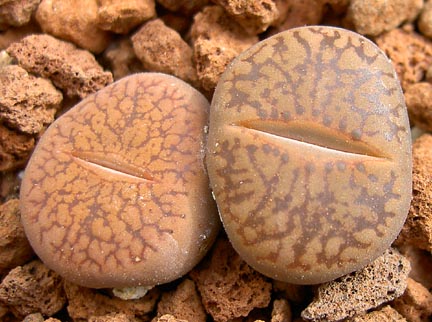 And here’s one that doesn’t hide well in our red lava mulch. Maybe we should find some green rock. 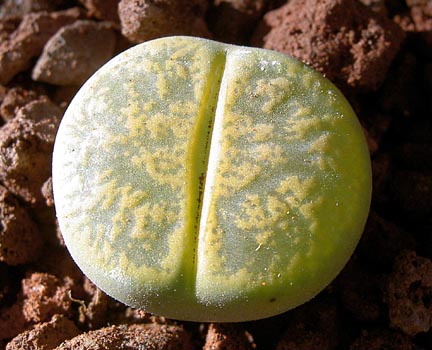 And here’s my favorite lithops bloom photo. It’s the one I use for greeting cards. 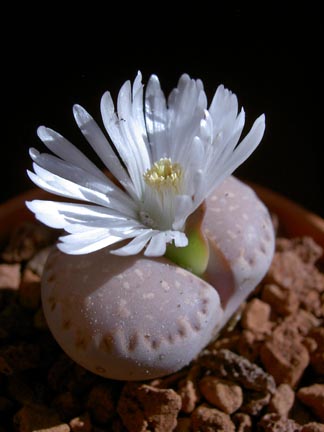 It’s probably a ssp. schwantesii, but that seems excessive.

Sometimes we find little bite marks out of them – the mice like them it turns out. So then we lay out little no-kill mouse traps, and check back every day for live mice that we release down the street. If you forget to check a no-kill trap for a day, it becomes a kill-trap.