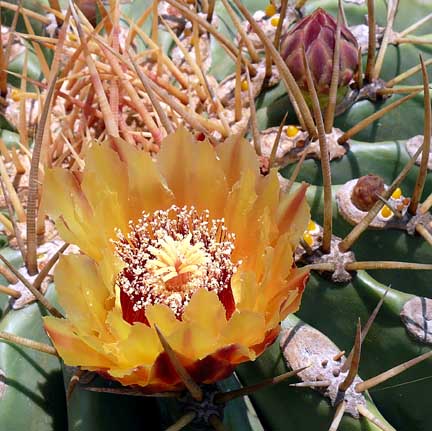 Ferocactus pottsi from the Chihuahuan desert is a very reliable bloomer. Not as brightly colored as some other fero’s, still, it is nicely striped. And as you can see, the buds are pretty too.

There don’t seem to be any common names associated with this, so I’m calling it the Leopard Barrel.

I wonder who this pottsi person was? Shall we look it up? It was originally named Echinocactus pottsii in 1850, and renamed F. pottsi in 1961. So that means the pottsi name is old, very old. There’s also an Opuntia and a Mammillaria named pottsii, also named by the same person who named this one, Salm Dyck.

And we’ve found our answer:

Named for John Potts, manager of a mine in Ciudad Chihuahua.

The intertubes are a wondrous thing. And it is a beautiful plant.