Leaky Kayak? Plant it Up!

Thomas sends along a link to a Seattle PI article about planting up your kayak with succulents. Hopefully it is an old, leaky kayak that you’ve decided to repurpose.

This was a very unique project that started with a donation of a used kayak from Seattle’s popular Agua Verde Paddle Club and Cafe in the University District by Lake Union. They cut a kayak’s end off so it would stand and it became a featured display for UW Botanic Garden’s booth at the 2011 NW Flower and Garden Show. I planted it up as a vertical garden to showcase the plant diversity that exists throughout Lake Washington and the Arboretum and the proprietors at Agua Verde wanted a similar display in front of their paddle club and visible by diners in the cafe above. 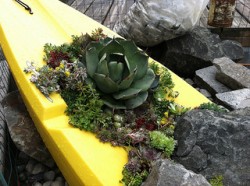 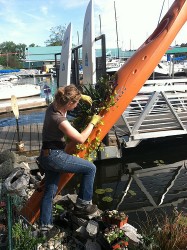 I hope the “very unique” in the first line there didn’t get you all emailing and commenting to the newspaper for their lousy grammar, or I suppose for their lack of editing. Don’t go getting all grammar-police on the dead-tree-newspaper. They are a dying industry and really don’t need you sending in corrections.