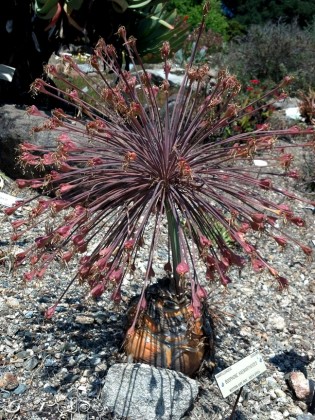 This Boophone haemanthoides is at the UC Berkeley Botanic Garden, and is bloomed out at this time.

Boophone haemanthoides is found mainly in the west coastal areas of the Western Cape of South Africa, but extends to the Bokkeveld Plateau. These are areas with winter rainfall. It grows in sand or dolerite outcrops on coastal flats or upland slopes. Summers are hot and dry. The bulbs are really large and produce flowers in midsummer with leaves in autumn. This species has varied colors in the flowers, mostly pink to a creamy white.