From CNN we find out a common herbicide used in the US but banned in Europe may be the leading cause of falling amphibian populations.

Atrazine, a weed killer widely used in the Midwestern United States and other agricultural areas of the world, can chemically “castrate” male frogs… 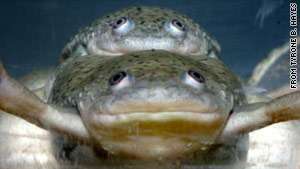