It’s not often we get photos that are as clear and indicative as these today from Susan, who wants to know the species. And yet, even with the clearly round leaf, the marginal plantlets, and the bloom picture, the best we can do is narrow it down to one of two genuses (genii?). Maybe you can help identify the species?

Hello,
Well, this started as one little stem and it’s grown. Then it was many stems falling out of the pot and rooting with long aerial roots in anything close by. Then it formed little buds and I waited and waited and thought for sure the flowers would be white. I was wrong. They’ve opened up into beautiful bell like flowers in a dark peachy color. Something came into the yard and broke a few of the stems. Never one to toss a stem, I layed the leaves down and suddenly I had more little plants coming up. From looking through your database of images, is this some sort of kalanchoe? The flower in the picture doesn’t really glow but a sliver of sunlight was hitting it just right so I snapped a photo. So? Whatcha’ think? 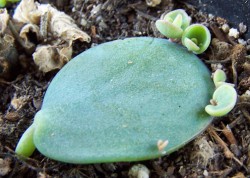 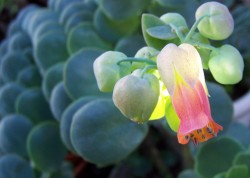 Susan,
Yes, it is a Kalanchoe, or a Bryophyllum, it’s hard to say exactly which species from the photos. I’ll post it on the blog, and see if anyone out there knows for sure.
Peter