It's an Agave Bloom

HI, I was wondering if you could tell me what kind of plant this is, and if it is unusual for it’s size. It was growing for some time then this tree like appendage came shooting out of it. It is well over the top of our 1 story home. Easily close to 2 stories high. Picture is included. Thanks for your response. 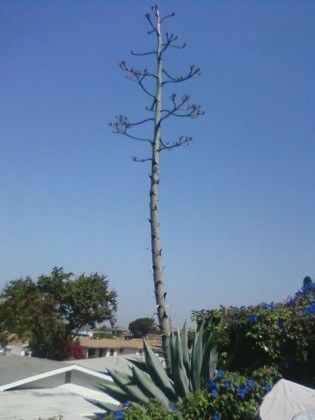 Your plant is an Agave that it is starting to bloom. It looks like it is an Agave americana or “Century Plant”. The blooms will open soon and look amazing, the stalk will eventually (over the next year or two…) dry out and be a sculptural corpse… Agave bloom stalks were often used as alien trees in old science fiction films. Agaves grow for a long time (but not really for a century) and then bloom and die. However there should be “Pups” or baby plants around the base of the blooming mother plant that will repeat the cycle, as Agave have a habit of cloning themselves before trying to do “sexual reproduction”. If there is another Agave bloom in you area and you have Agave moths, you might even get seed pods. If not the flower stalk will sometimes try another cloning strategy and grow plantlets where the blooms are, that eventually helicopter down and root in where they land.