Fake cactus? I found them for you, online, ready to order. 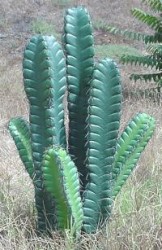 Here we see a classic fake Cereus peruvianus, aka the Night Blooming Cereus, however not to worry, these don’t bloom and so won’t attract bats to your home late at night to come pollinate the large white flowers, that don’t exist on these fake plants.

And this is something pretty impressive, an 8ft. tall Saguaro, with seams and everything.

If you click through you’ll also get to see fake Pachypodiums, fake Euphorbias, and even fake 4″ mixed cactus and succulents for your tabletop. Now that’s service. Oh, and Science! too.

And in case you were wondering they also have fake orchids, fake topiary, and a gargoyle smoking water fountain. Hah!