Wired Magazine is fascinated by the idea that seed pods can open up after they’ve been detached from the plant, i.e. after the tissue is “dead.” It seems to me that lots of seed pods that open do so after they’re “dead” but what do I know, I’m neither a botanist nor a reporter for Wired.

The article uses a Delosperma seed pod as an example of the “rare” phenomenon of dead plant “origami.” Since succulents’ cell structures can store lots of water, this example’s seed pod can unfurl, i.e. open, when the rains come. 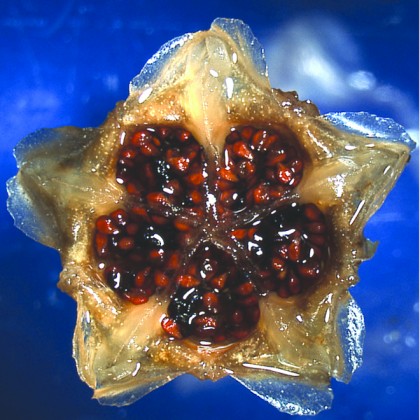 Now, what about the fact that these unopened seed pods, or “fruit”, are edible and often eaten by the birds?