From Hawke’s Bay, New Zealand, the local newspaper finds that an agave in bloom is a sweet mystery for the residents.

There’s a strange presence in Haumoana that has curious onlookers stumped. 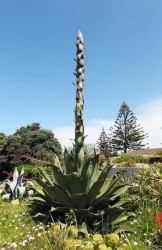 Outside Paula Novak’s art gallery a 5m stem protrudes from a plant… 60cm in diameter and began its growth spurt about six months ago. The unusual plant is subject to speculation from visiting garden groups, locals and visitors, many of whom liken it to a giant asparagus….

They believed it was a form of century plant, which produced a spike that reached heights up to 8m before flowering.

Anyone who can shed light on the plant could contact him at the gallery on 875 0061.

So I’m sure you all can help these people out with the information they need. They kindly printed a phone number if you wanted to call them in Haumoana and fill them in on the life cycle of the agave.

But wait! Don’t call New Zealand just yet! First, let me tell you a little something about this Haumoana:

The Kingdom of Haumoana is a coastal settlement just south of the Tukituki River outlet in Hawkes Bay, New Zealand… 10 kilometres east of Hastings; 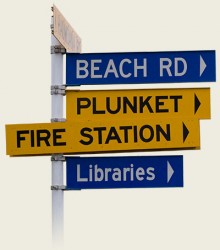 it incorporates a school, a Church, a General Store, a takeaway shop, a garage, a hall and a Fire Station. The village has developed as a bach settlement and the surrounding area has historically been used for sheep and cattle grazing…