Sometimes we have a bit of science on this blog, sometimes even some Science! but today we have the physics of cactus, from Physics Today or some such journal. 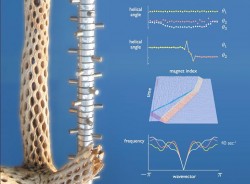 And here’s the science bit:

In a recent study, researchers have experimentally demonstrated for the first time a celebrated model of “phyllotaxis,” the study of mathematical regularities in plants. In 1991, S.L. Levitov proposed a model of phyllotaxis suggesting that the appearance of the Fibonacci sequence and golden mean in the pattern of spines on a cactus can be replicated for cylindrically constrained, repulsive objects. Now, researchers have constructed a “magnetic cactus” with 50 outward-pointing magnets acting as spines, which are mounted on bearings and free to rotate on a vertical axis acting as the plant stem. With this setup, the researchers, from Los Alamos National Laboratory in New Mexico; Cornell University in Ithaca, New York; and The Pennsylvania State University (PSU), have verified Levitov’s model, and their study has been published in a recent issue of Physical Review Letters.

There’s more too, if you click through. Maybe I should have borrowed a smaller quote, but it’s early and I feel like giong to get another cup of coffee instead of excerpting all morning long. Interesting concept, though.