(T)he renovation of West Virginia University’s Brooks Hall began in 2006… A few years later, 85 percent of the roof is vegetated, adding a splash of green to both the downtown campus and the university’s coffers…. 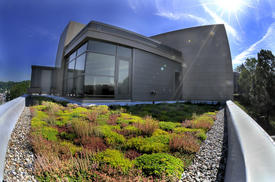 The vegetation is known as sedums and succulents. They act as natural absorbents, holding, filtering and easing water into the drainage systems.