Growing succulents for green roofs is becoming a big business. We’ve sold some, but you really need to work in large volumes, and we’re too urban for that.

On the other hand, Southern Maryland seems like it would be the perfect place. 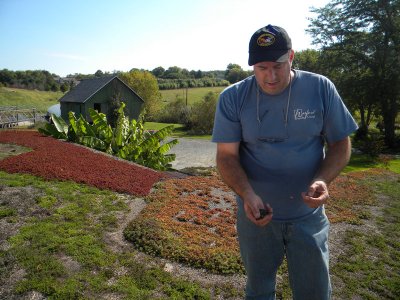 John Shepley shows one of the many green roof plants grown on the farm. (Photo by Maryland Newsline’s Lindsay Gsell)

Rows and rows of small sedums, delosperma and other green roof plants sit below, soaking up the sun in their newly insulated home.

These plants have been the sole focus and cash crop of the farm since 1998. Nearly a million of them are grown each year for green roofs around the country, says Shepley, a former electrical engineer who is now co-owner of the business.

The National Aquarium in Baltimore, the Walter Reed Community Center in Washington, D.C., and Radio Shack’s World Headquarters in Fort Worth, Texas, are among the farm’s more than 400 clients.