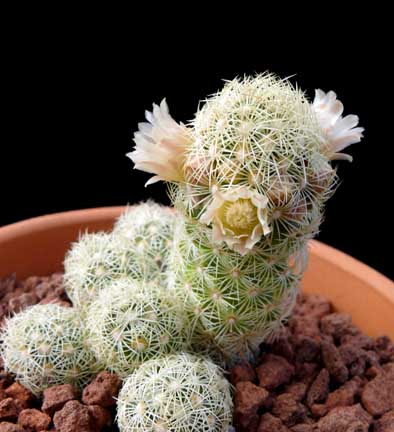 These are grown in many different cultivars, and we have a number of those cultivars, but we don’t label them as such. It’s a philosophical difference with those who do label all those cultivars. But we have 3 cultivars out right now if you look carefully, not that you need to. On top of that there are also two subspecies, although I’ve never seen any of these plants with the subspecies labels in the trade, so they may not be available.

As you can probably guess, it’s from Mexico. The cylindrical stems can get over an inch in diameter, but tend to get sometimes even 4″ in length. The fruit is pink. You can figure out the flower color by looking at the picture. But of course they also vary towards a more pinkish color too.

These are reliably hardy down to 25F, but are often grown in much colder locations if kept dry.