Tristan Toms, owner of the Amigos restaurant at the top of Union Street near Castle Circus in Torquay, was told his giant six-metre tall sombrero-wearing, maracas-playing advertising cactus is just too big and too dangerous for the area…. 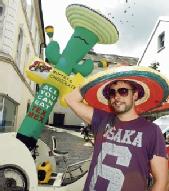 “I guess it was too big and too green.”

I wonder if Torquay is anywhere near California, because maybe we could take the banned giant inflatable cactus off his hands. Let me look it up. I see it’s in South Devon. Of course! Well, is that in the US? No, it’s in the UK. Now you know. Too far for us.