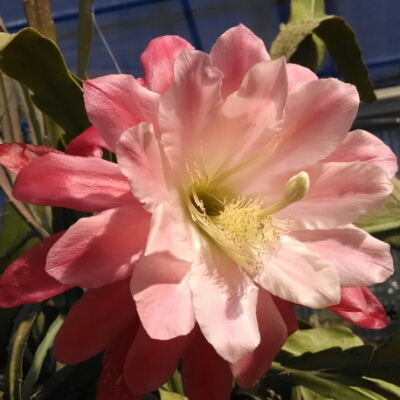 It’s a Monday holiday miracle! The largest, most colorful Epi bloom I have ever captured on digital film.

Epiphyllums are often called Orchid Cactus, and sometimes called Night Blooming Cereus, but that last one would be wrong. Although some epi’s are night bloomers, most are not and none of the Epiphyllums are Cereuses. Cereus are Cereuses. And some true night blooming Cereus are almost as spectacular as this day blooming Epiphyllum. But then you’d have to wake up in the middle of the night for those, but not for these.